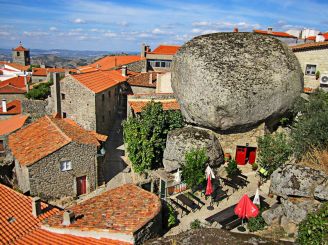 Monsanto - a small ancient village, which is located in Portugal. It was founded back in the 12th century and survives to this day virtually unchanged. Here, the narrow streets of cobblestone are amazing stone house where the giant boulders are used as walls or roofs. It is interesting that on the twenty-first century here just reminds modern satellite dish, manholes and air conditioning.

In these places, a little bit poor natural vegetation, so the locals compensate its lack of a large number of pots of flowers, shrubs and various climbing plants. Not far from the ruins of the fortress Mansanto, which was built by the Templars in the middle of the 12th century. It is known that the castle existed for about 800 years and finally was abandoned after the explosion at a gunpowder warehouse.

This old stone village is 227 kilometers north-east of Lisbon, as well as 305 kilometers south of the city of Oporto. Monsanto can get to Highway A23 and A1 (E80), if you drive from Lisbon. If you travel from Porto, the need to go on the motorway A25. There is free parking at the entrance to the town of Monsanto.