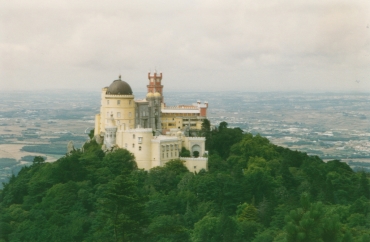 Pena Palace - an architectural jewel of the city of Sintra. The palace was built Prince Ferdinand, husband of Queen Maria II of Portugal in 1840. It stands on the highest hill of the city, on the site of an abandoned monastery. Originally this place was a royal summer residence.

It has mixed a lot of different architectural styles. Battlements and turrets with various ornaments, dome and steeple with a clock - nothing goes unnoticed. Thanks to the red-and-yellow color and unusual wall decor palace looks fabulous. In the park area of the palace grow vines, old pine trees and many exotic plants.

Pena National Palace is one of the Seven Wonders of Portugal and a World Heritage Site by UNESCO. In our time, the building of the palace is often used by President of the Portuguese Republic for official ceremonies. In addition, the Pena Palace is open to all who want to see all his splendor.